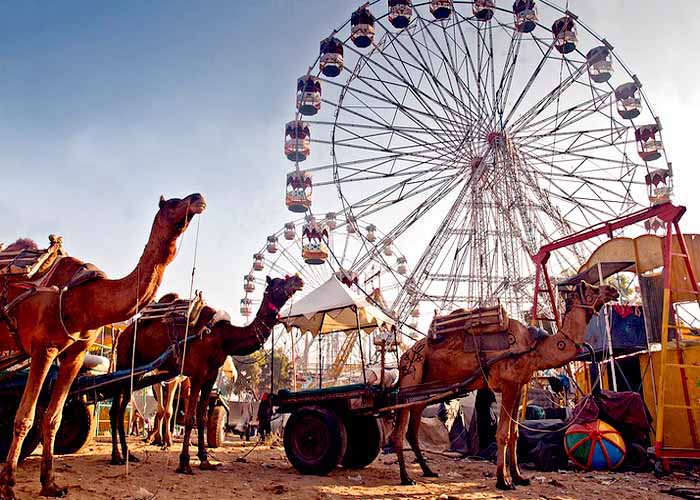 If you're interested in the camels (and other livestock), you should plan to arrive a few days before the official start of the fair. The official dates are when the government sponsored cultural activities take place. However, camel traders tend to arrive early and leave early. Here's what you can expect in the lead-up to the festival and during it.

October 24, 2017 -- camels, herders and traders start arriving and setting up camp at the sand dunes

October 25-26, 2017 -- arrivals continue and the gathering grows at the sand dunes. Lively trading starts taking place. This is a great time for photography, as it's possible to move around freely and observe the scene.

October 27, 2017 -- the sand dunes are at their most crowded with camels, horses, other livestock, traders and herders.

October 28, 2017 -- more and more people arrive in Pushkar, and the official program of camel races, competitions and other activities begins at the fairground.

October 29, 2017 -- the scene at the sand dunes gets busy with camel cart rides, vendors, musicians, gypsies and tourists. Camels and traders start disappearing back into the desert as their business concludes.

October 30-31, 2017 -- the town starts to swell, especially around the temples and market area near the lake, as pilgrims begin arriving for the religious part of the fair. Official events for tourists continue at the stadium. There are amusement rides, folk dances, music performances, stalls, and other entertainment including turban tying and mustache competitions.

November 1, 2017 -- the town is full of colorfully dressed pilgrims from all over the region, while most of the camels and their herders have now left the sand dunes.

November 2-3, 2017 -- The town is busy with pilgrims. Bhajans (devotional hymns) and religious ceremonies take place at the temples. The most important temple, which is the center of celebrations, is dedicated to Lord Brahma (the creator) and the religious part of the festival is held in honor of him.

November 4, 2017 (Kartik Punima) -- this is the holy full moon night when thousands of pilgrims gather to bathe in the lake to absolve themselves of all sins, drawing the fair to a close. There's a grand finale of events, including a maha aarti (worship with fire) by the lake and fireworks display.